Robert Frank’s (1924-) Les Américains, was first published by Robert Delpire on 15 May 1958, the 83 black-and-white photographs had been taken by the Swiss born photographer on a road trip across America he took between 1955 and 1956, and where accompanied by a text on the social and political history of America by Alain Bosquet. Each of Frank’s photographs is placed on a right-hand page, with Bosquet’s text on the left, with the edition forming part of the Encyclopédie essentielle series, which aimed to present foreign countries to a French audience.

In 1959, the first English edition of The Americans was published by Grove Press, New York (released in January 1960), it retained the same visual sequence as the Delpire edition, but replaced Bosquet’s text with an introduction by the poet and novelist Jack Kerouac (1922-1969), whilst the right-hand opposite Frank’s photographs had captions by the photographer, which describe the location of the image.

Although widely criticised when the book was launched in the United States, this seminal work, has since 1959, been published in numerous editions and become, one could argue, the most influential photobook of all time.

Later this week Wayne will take a look at the key editions of ‘The Americans’ as well as the history of the initial project and subsequent books.

The current English language version of Frank’s ‘The Americans’ published by Steidl is available from the Amazon link below or from many other book stores. 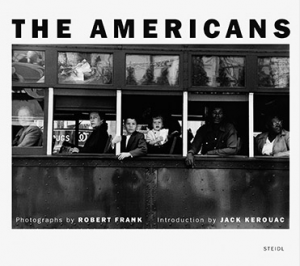 I grew up in the US during the 1950’s and came of age during the tumultuous 60’s. Frank’s book documents the middle of the 1950’s and was released just prior to the explosive 1960’s decade. I found my first copy of The Americans in a second-hand bookstore sometime in the early 1970. It was Kerouac’s name on the cover that first enticed me (I was born and raised in Kerouac’s home town), in the end it was the photographs that captured me. I wasn’t sure what I had, but the evocative images struck me from the beginning. The careful sequencing (where I learned how story telling takes shape) and the format, with the blank facing pages, lends itself well to close inspection of each photo. There has always been, at least for me, both a subtleness and strong articulation in the images. Plus they all have some sort of interesting angle and often carry some humor. When looking at these images I often get transported as an observer back in time to the moment, becoming part of what is happening. These photographs captured the breadth this country as it entered a pivotal decade of the 20th century – the hope, difficulties, feelings, tension, and insecurities.

I guess this became more of a rambling personal reminiscence, than a review. Still, it was inspirational in my own development in that I realized for the first time of the possibilities capturing someone in public. I never saw a photograph the same way again.

I would be interested to hear a discussion about the initial criticism for the book when it was published in the US and a discussion on how the sentiment changed to be lauded as such an influential book.

Some more links from Larissa Leclair – thanks Larissa!

“It seems I made these photographs. I’m happy that they mean so much to you.”

“N.Y.C. May 1969 For Hugh Edwards  First with gratitude and respect to help + encourage when it mattered (1958) and now with regrets not to see in print your thoughts long before they became fashionable Your friend Robert.”

Those are inscriptions/dedications in The Americans, from Robert Frank to Hugh Edwards. Edwards was the Curator of Prints, Drawing, and Photographs at the Art Institute of Chicago. He gave quiet but effective support to emerging photographers, including Robert Frank. As Randy Kennedy put in the Times, Edwards was “a pioneering but still underappreciated curator.” http://topics.nytimes.com/topics/reference/timestopics/people/l/danny_lyon/index.html

Frank had his first one-person show in a major venue at the Art Institute of Chicago in 1961. That was Robert Frank: Photographer and Hugh Edwards arranged the show. Here is the 1960 letter from Edwards inviting Frank to exhibit.

Dear Mr. Frank: It seems so long since I was in New York and talked with you on the telephone that I am afraid you have forgotten the conversations we had in regard to an exhibition. Since I came back to Chicago, I have been very busy and knew you had little time to be bothered with correspondence. However, I have not forgotten that you said you might be interested in a show and my experience with The Americans have been so many since my return that I am writing you at last, still with the hope that we may have an exhibition here.

In the last week I have completed an exhibition schedule so that I am able to give you, if you are still interested, some idea of when the show would take place. How would the period of April 28 through June 11 of next year suit you? I remember you said you would like to have some delay and although these dates-almost a year in the future-may seem distant, the time will pass much faster than we think.

I have had the museum store stock the American edition of your book. They have sold a number of copies and there is steady demand for it. We have both the French and American editions in the print room and they have been enthusiastically received by many young photographers who come here to look at the prints in our collection. This pleases me a great deal because no other book, except Walker Evans’ American Photographs, has given me so much stimulation and reassurance as to what I feel the camera was created for. I hope this does not have too pompous a sound for I feel your work is the most sincere and truthful attention paid to the American people for a long time. Although so different and not stemming from them, it may be kept in the company of Frank Norris, Sherwood Anderson, Hart Crane, Jon Dos Passos and Walker Evans and these are the best in American expression in the time I can remember. It is a real privilege to have known your pictures in their first freshness and newness. Someday they will spread to everyone and even the most sterile and analytical of intellectuals will except them at last.

I should greatly appreciate hearing from you as soon as possible in regard to what you think about the exhibition so that I may put it definitely in the schedule of exhibitions.

I hope to be in New York again, at least in the early fall, and talk with you again. As typewriters and telephones are instruments of inhibition for me, I regret I could not arrange a meeting during those days I was there this spring.

The letter appears at http://bleakbeauty.com/edwards_letters.html . It is the second item, following an appreciation by Danny Lyon.